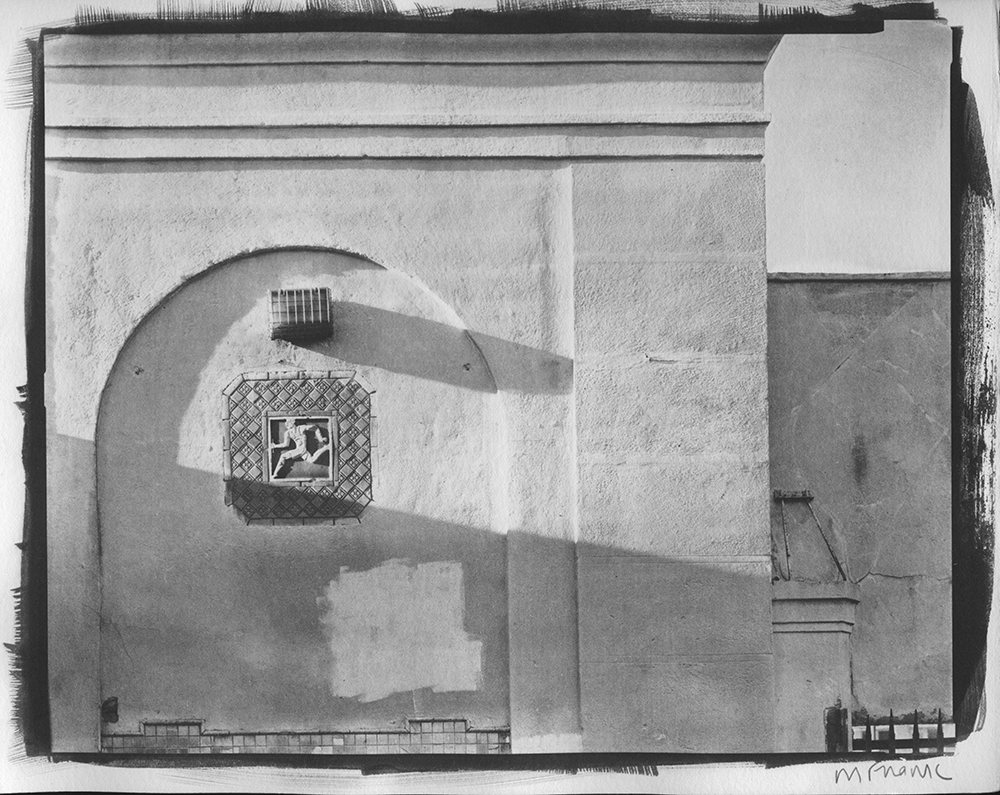 I recently had the opportunity to interview photographer Martin Frank, who is also an oncologist. At the Art Factory (70 Spruce Street), during the 2018 Paterson Art Walk, Frank will exhibit his Olympia series— a group of photographs of the athletes depicted on the walls of Hinchcliffe Stadium. These haunting images are captured using a 8"x10" view camera and developed by hand using a "palladium" process. The Art factory is an inspiring venue that will showcase art and artists during this year's Art Walk.

In keeping with the tradition of physician/artists exemplified by William Carlos Williams, Frank practiced medicine in Paterson for years, and became familiar with the city during house visits to its residents. I became interested in his process, and how his life as a physician relates to his life as a photographer. Below is our online interview: 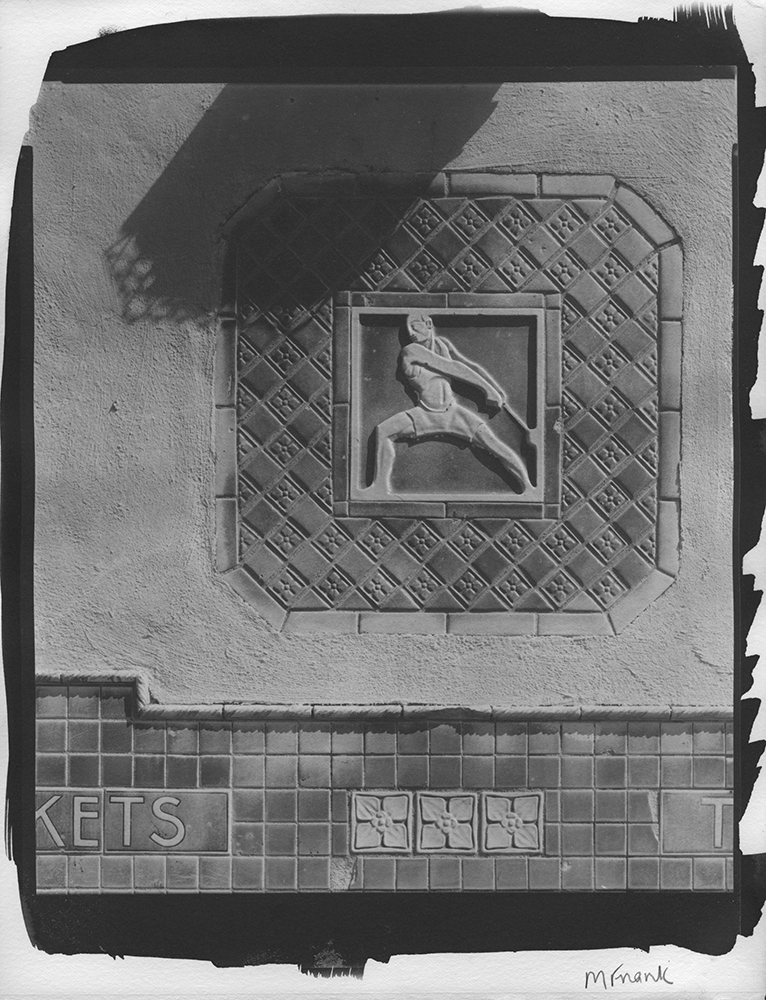 1) How did you come to practice photography? Is there a connection between this pursuit and your role as a physician?

I became seriously interested in photography approximately 20 years ago,  inspired by an exhibit I saw of John Sexton's black and white landscapes. Perhaps photography  became a way of immersing myself in a moment - a mindset so different from what I do as an oncologist.  I see something that excites me, set my camera on a tripod, manipulate the camera's movements, wait for the proper light, and feel confident that I've captured something special when I snap the shutter.  And I  spend lots of time on each print, using chemicals and my hands to make the final product. It's contemplative, thoughtful, planful at its best moments— maybe like good patient care.  Being a non-digital traditionalist (my camera is made out of mahogany, brass + leather!),  I also feel  a fellowship with past generations of photographers. It can be a welcome relief from all the time spent looking over  a laptop screen while with patients. And I am proud of how I've decorated my office and our chemotherapy infusion suite with my images. It can "break the ice" with patients.  More than one has found particular images soothing and helpful during their chemotherapy.  It's not rare for patients to bring in their own images to share with me— sometimes a few snapshots, occasionally sophisticated portfolios in cases!

2) You use a process called "palladium". Can you describe it?

It's a vintage photographic technique that peaked in popularity at the beginning of the 20th century and has a delicate tonal range. Images are printed on hand-coated watercolor paper. Edward Steichen was a master, and combined the palladium/platinum with overcoats of gum bichromate in the best versions of his image, "Little Round Mirror".

3) You created your Olympia series prior to 2016. How did you happen upon this subject for your series? Are there other areas of Paterson that you would like to turn into art?

My connection with Paterson certainly originated with my being on staff at Saint Joseph's hospital for many years. I ran the outpatient oncology clinic for nearly a decade, and occasionally made house calls  especially for terminal patients. This was without GPS so I got lost a lot! I passed by the stadium, especially on my way to my framers, New Jersey Frame and Moulding,  but it wasn't until I began my immersion in palladium that I realized  how cool it might look using this medium.

About 2 1/2 year ago I was inspired to photograph the human figure. I heard about the Art Factory, and used it facilities after meeting its owner who was incredibly generous, allowing me to work with a model there gratis. What resulted was my best work ever! I'd like to use a recently restored 100 year old panoramic 7x17 camera there to photograph the human figure. I'd also like to hear about other spots in Paterson someone might recommend. Patients always come to my office recommending sites to photograph, sometimes bringing maps, so I'm good about listenting to suggestions. 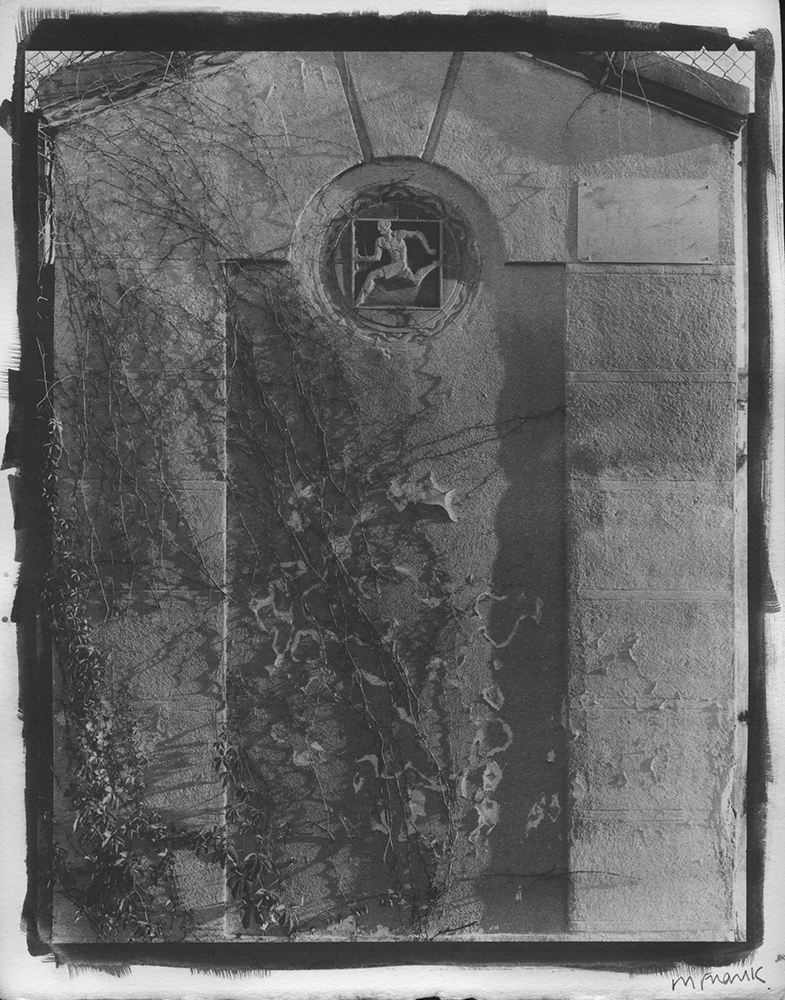 4) You mentioned the Greek notion of irony. Do you look for images that set up one expectation and surprise with another? Is your work more "image-driven" or "concept-driven"?

In the Olympia series, I was struck by the ironic contrast between the detritus -decay-deteriorization of the Stadium and these timeless-iconic- heroic Greek figures. I think my work is more often image-driven than concept-driven, but subliminally there must be a tension, a contrast, an irony: an opposition between textures, angles, light+shadow that I think give a work strength and power. In my figure studies, I found the opposition between the softness of the human form and the gritty, sharply-angular space in which they were posed very exciting.

5) Are there photographers (or artists in general) who inspire your practice?

Edward Weston and his son Brett Weston- For them the commonplace becomes abstract. And Edwards' figure studies in the sands of Oceana are particularly beautiful. Also their work is so technically perfect. Minor White injects a Buddist spirituality into his abstract B&W images. Edward Steichen— His image, Little Round Mirror, which I saw in at the Met, is one of the most beautiful things I've ever seen. It led me to explore the pictorialist movement, "the Photo Secession" (an early 20th Century movement in photography which he co-led) and platinum/palladium image-making which Steichem came to as a painter.  Clyde Butcher— a contemporary landscape photographer based in the Everglades. I love his interplay of water and sky. I'd like to think that their craftsmanship, and dedication to transforming the mundane are in a small way part of what I do as a photographer.

Experience Martin Frank's Olympia series the weekend of June 8-10, 2018, during the Paterson Art Walk, sponsored by the Paterson Art Council. Olympia will be at the Art Factory, a premier factory event venue, located at 70 Spruce Street, Paterson.

JKP MITZVAH PHOTOGRAPHY recently have been shooting amazing Pre-Shoots at the ART FACTORY in Paterson, NJ. We had the chance to ...
Start Reading
ArtFactory Apr 7, 2018 6:47:56 PM 5 min read

I was raised in Ridgewood, NY, five miles from midtown, New York City.  It was a blue color neighborhood then. Great people, ...
Start Reading