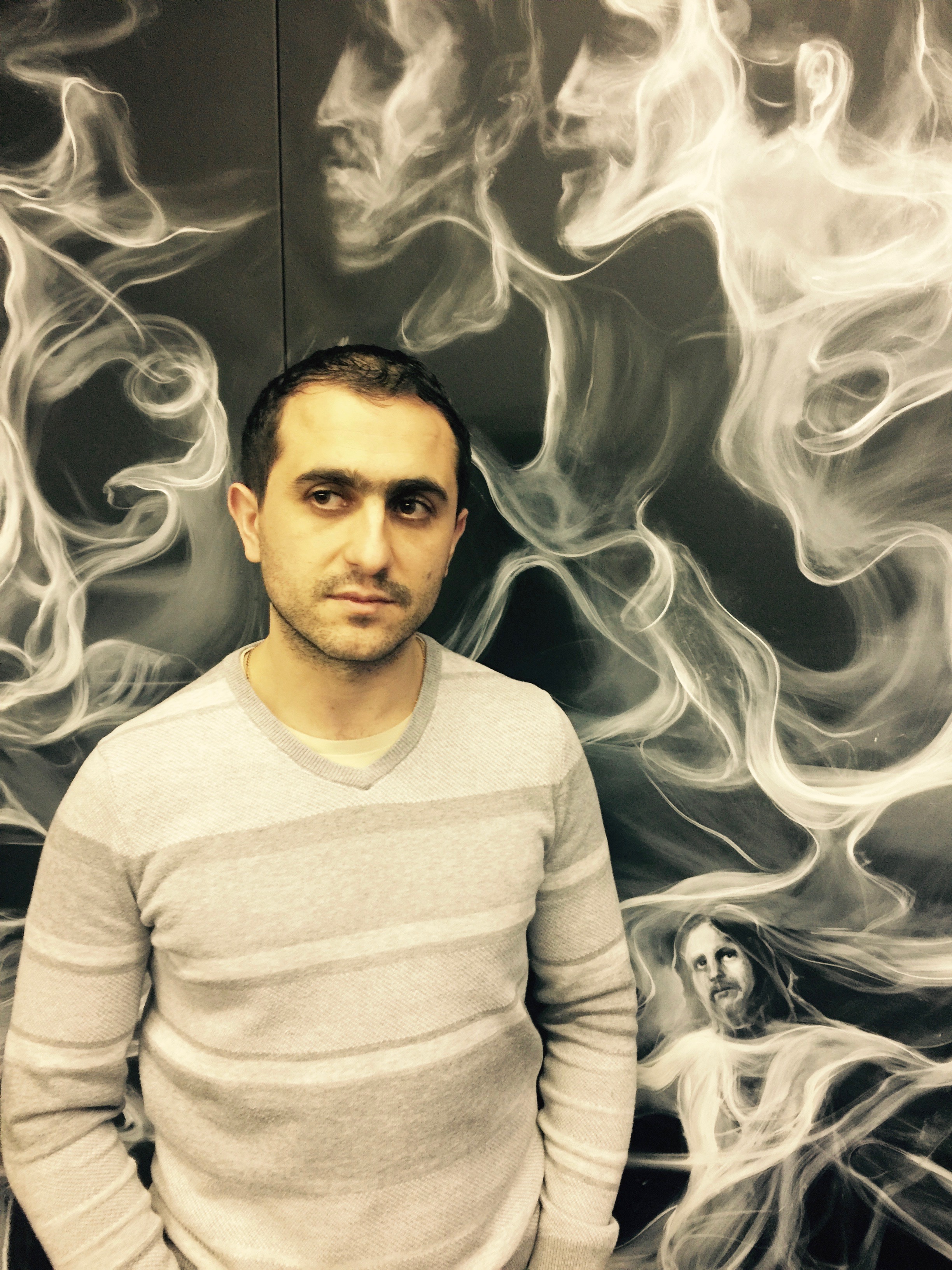 This afternoon I visited the artist Mher Khachatryan, in his Art Factory studio on the 2nd floor. This is where he produces his signature "smoke paintings," oftentimes mural-sized works that include hidden figures within veils of white and gray smoke. When I asked Mher about the significance of the smoke, he talked about its symbolism of impermanence, of life and death: "Smoke can harm you if inhaled, and it can also mesmerize." 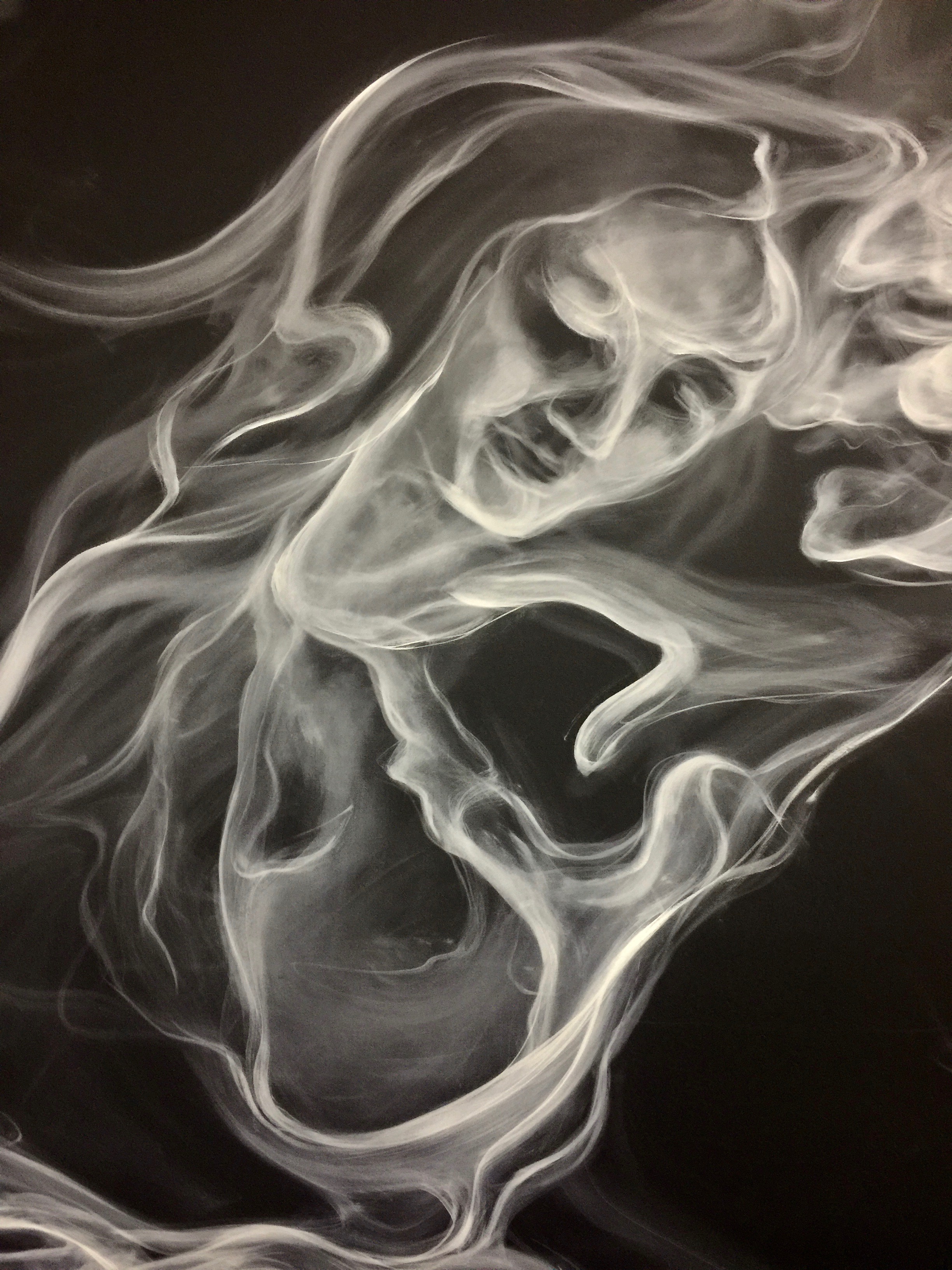 What interested me about the paintings was the process. There is the spray painting of the black surfaces (all stretched canvas), and the additive process of the white paint, which seems to almost be airbrushed. But these thin veils of white are applied with a brush, mostly a flat brush that is alternately turned to produce lines of varying thicknesses. In the case of diffuse areas, Mher takes a rag and rubs the paint into the surface. Also, there is the black and white palette, which harmonizes the composition. Space and form are treated transparently, in keeping with the smoke engendering them.

The hidden figures in the paintings are often stylized female forms, but the paintings I most responded to depict idiosyncratic figures with varying degrees of finish. In the monumental work "9/11," several figures worked from source photos find their way into the image. They are real faces struggling to exist inside the transitory pillars of smoke. I found this struggle compelling. Both art and life involve struggle, its it the energy of each endeavor, and this image has it. 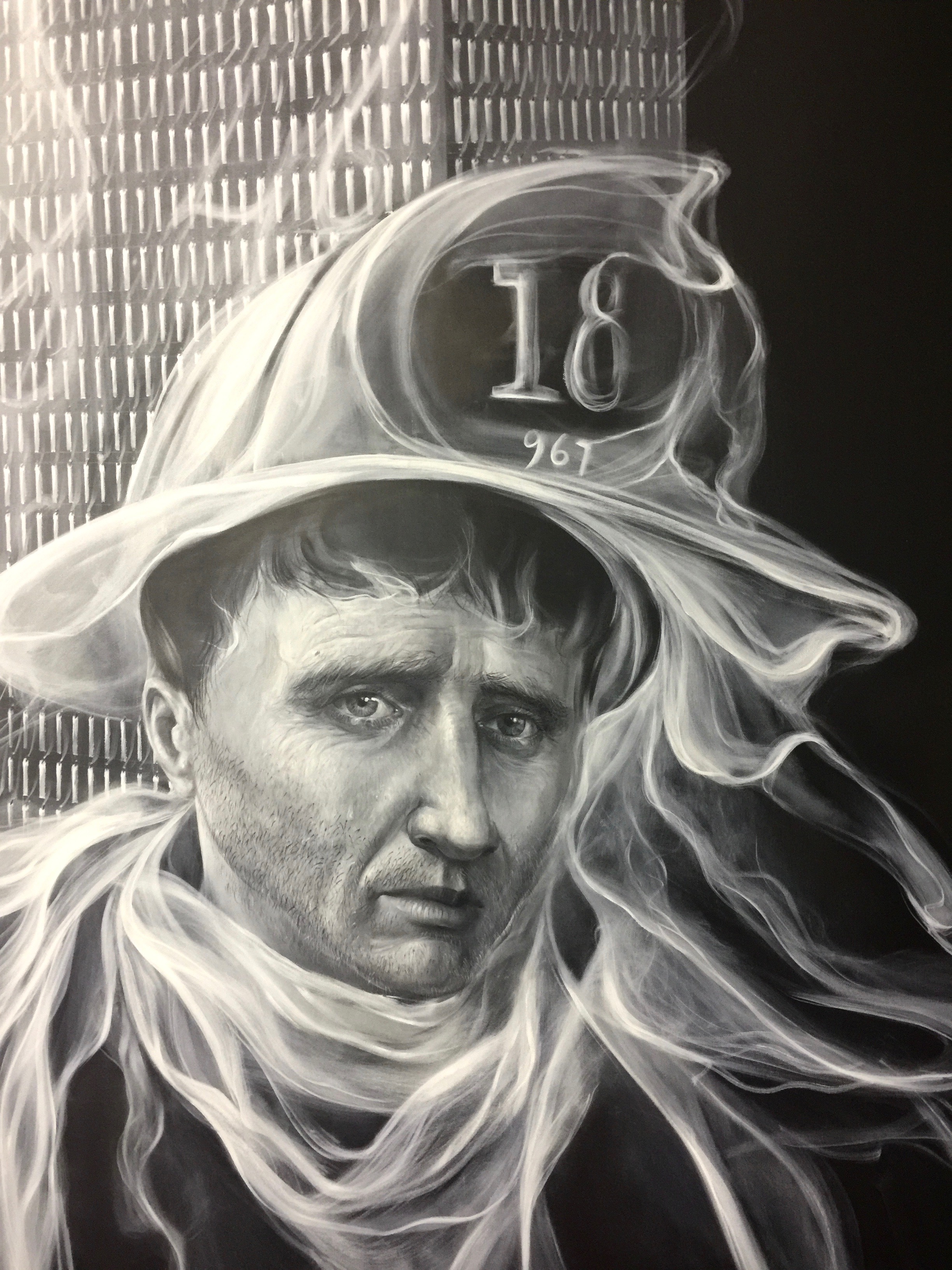 Mher Khachatryan was born and raised in Armenia, where an early interest in drawing was supported by his mother. At the age of ten, he was enrolled in a special after school program five days a week for art instruction. This was not an ordinary arts and crafts kid's activity: classes met for and hour and a half each day. By age 14, Mher attended an art college, and by 16 he would spend three years at the Academy of Fine Arts in Armenia, completing his formal art training. In 2000, at the age of 19, Mher emmigrated to the United States, to Panama City, Florida, where he became a young immigrant struggling to pay the rent and learn English.

With no family in the country, Mher worked various jobs over the next few years---from resaurant worker, to sales rep and manager---and moved around quite a bit, looking for work that would support his art practice. By this time, although quite young, he was completely committed to his art, and all work was focussed on his dream of making it as an artist. At one point, his search for work led him to Kansas City, Missouri, where he obtained his first professional art space at that city's Arts Incubator, where open studio events took place every Friday. A friend living in New Jersey finally convinced him to move to The Art Factory Coworking Space in Paterson, NJ, where the close proximity to New York City has held allure to artists since the early parts of the twentieth century. 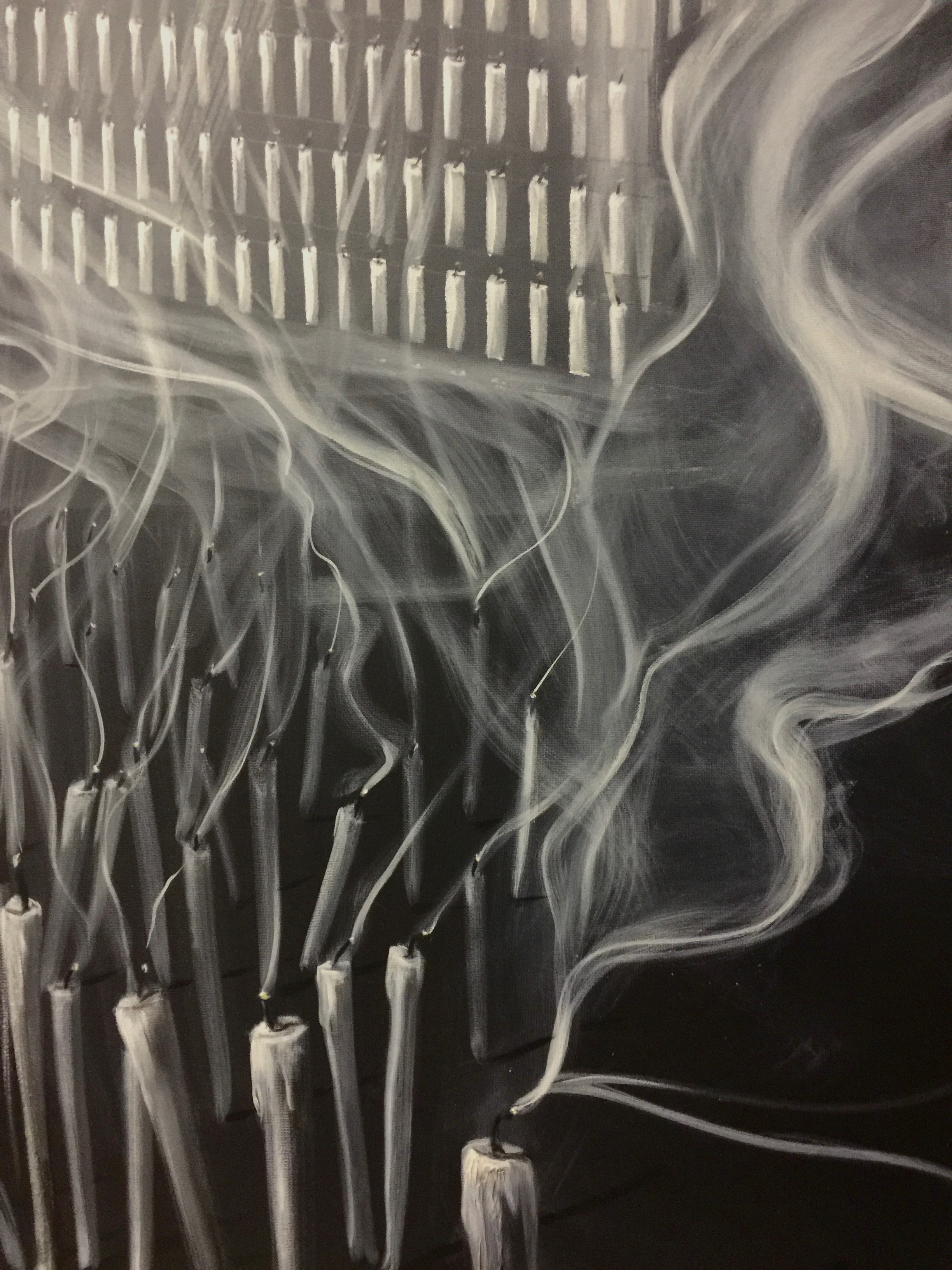 When I think of Mher's paintings and his artist's and immigrant's journey, I think of the words "impermanence" and "transience." There is an impermanence to the smoke, and the transience of his subject matter, which seems to revolve around beauty on the one hand (a transitory state) and the fragility of life itself. In his interpretation of Leonard's "The Last Supper" melded with Michelangelo's "Creation of Adam," there is also a tie to the deepest images of Christianity. 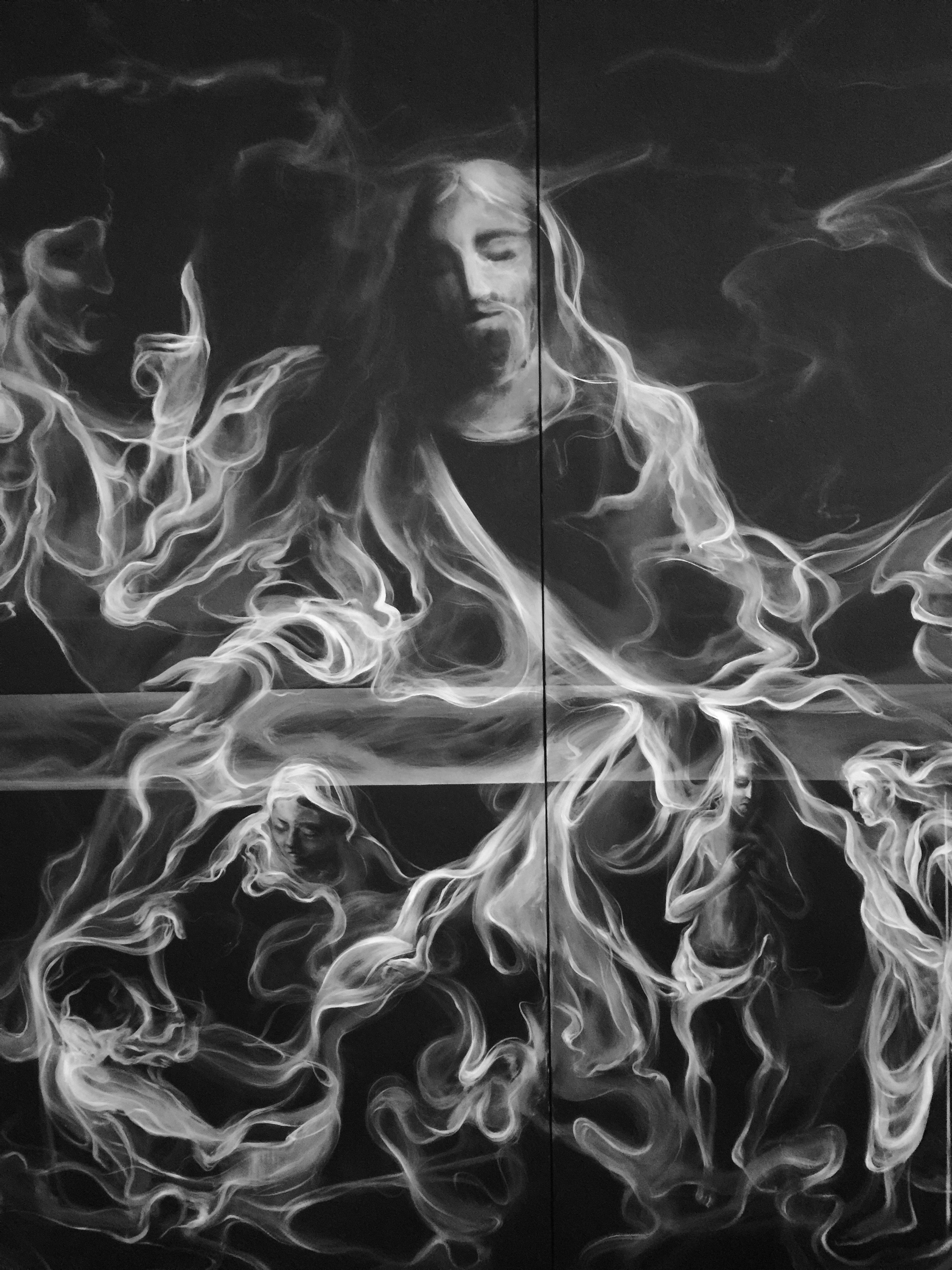 This other monumental work tells the story of the betrayal of Christ by resting Leonardo's image on top and moving Michelangelo's up fro the bottom of the frame. Where the two meet, an exchange of cause and effect occurs, where Judas's money-grabbing directly feeds the crucifixion. 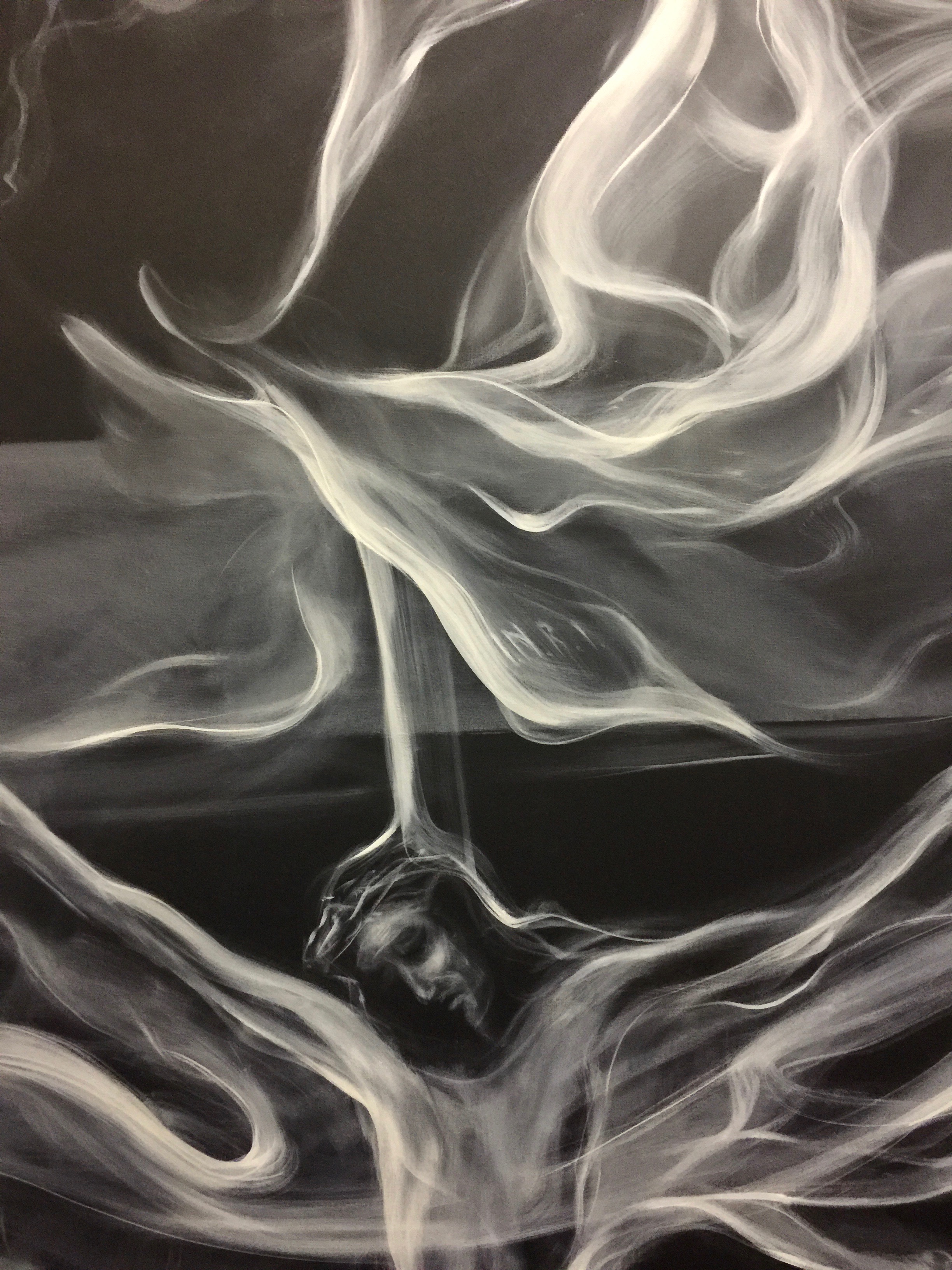 It's fascinating how the artist has taken this fundamental story, and two Renaissance giants, and created there interaction in smoke. MHER studio will be open for the ART WALK 2018.

The Art Factory (also known as Hollywood East) is housed within approximately 25 historic buildings that once housed the ...
Start Reading
ArtFactory Jan 2, 2018 12:00:00 AM 2 min read